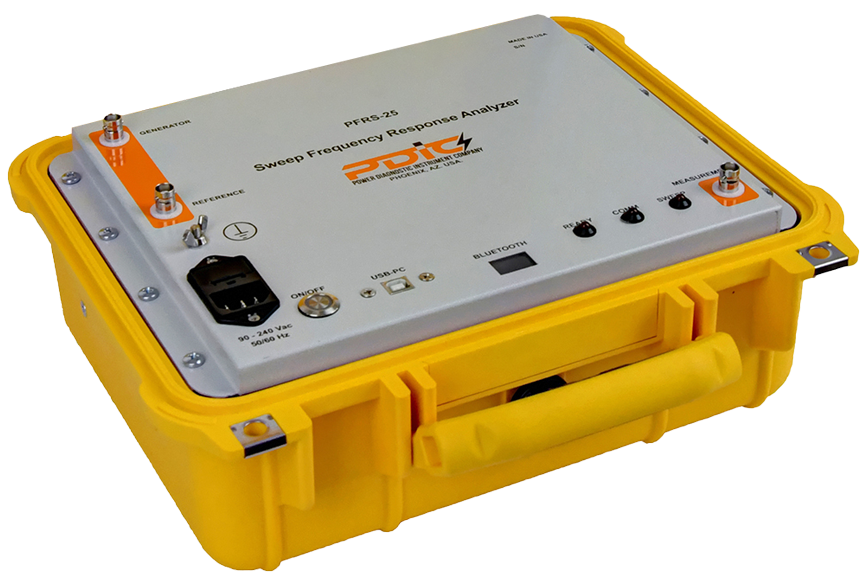 The PFRS-25 is a power transformer frequency sweep response analyzer designed to confirm the mechanical integrity of a power transformer by measuring the frequency response per the IEEE C57.149-2012 and IEC 60076-18 standards. The included test and analysis software can be used to perform tests automatically and to graphically compare test results and provide correlation analysis per the IEEE C57.149-2012 and DL/T 911-2004 standards. The software can be used to quickly assess the mechanical and electrical integrity of the transformer under test.

The PFRS-25’s sweep range is user selectable from 0.1 Hz – 25 MHz. A typical test sweep time, with frequency ranging from 20 Hz to 2 MHz, is less than 25 seconds. A quick sweep test can be performed in under 10 seconds to confirm proper cable connections.

The PFRS-25’s test voltage range is programmable from 0.2 Vpp to 20 Vpp in 0.2 Vpp steps. This enables the user to match the test voltage to tests performed by another manufacturer’s device.

The PFRS-25 offers a dynamic range greater than 130 db with a measurement accuracy of ±0.5 db. THe higher dynamic range eliminates the effects of noise and facilitates the comparison of different sweeps.

The PFRS-25 is computer-controlled via USB or wirelessley via Bluetooth. The Bluetooth feature allows test personnel to be at a comfortable distance from the transformer for increased safety and productivity.

An optional built-in battery backup is also available that can provide power for up to three hours. The PFRS-25 uses a sealed lead acid battery (12V, 7AH).

Windows-based sweep frequency response analysis software is included with each PFRS-25. The software can perform tests automatically and can be used to analyze the test data. The test data can be compared with previous data to analyze any changes. The software graphically compares test results as a magnitude vs. frequency plot, phase vs. frequency graph, or display both graphs at the same time. The software provides an analytical tool that can perform correlation coefficients between two traces per the IEEE C57.149-2012 or DL/T 911-2004 standard.
Users can quickly run tests in the field using pre-defined test connections. These include user-defined configurations as well as configurations defined by the IEEE C57.149-2012 standard. Test data can be exported to XML and EXCEL formats. The PFRS-25 software can import SFRA test records allowing the user to compare the PFRS-25 test records against other devices on the market. 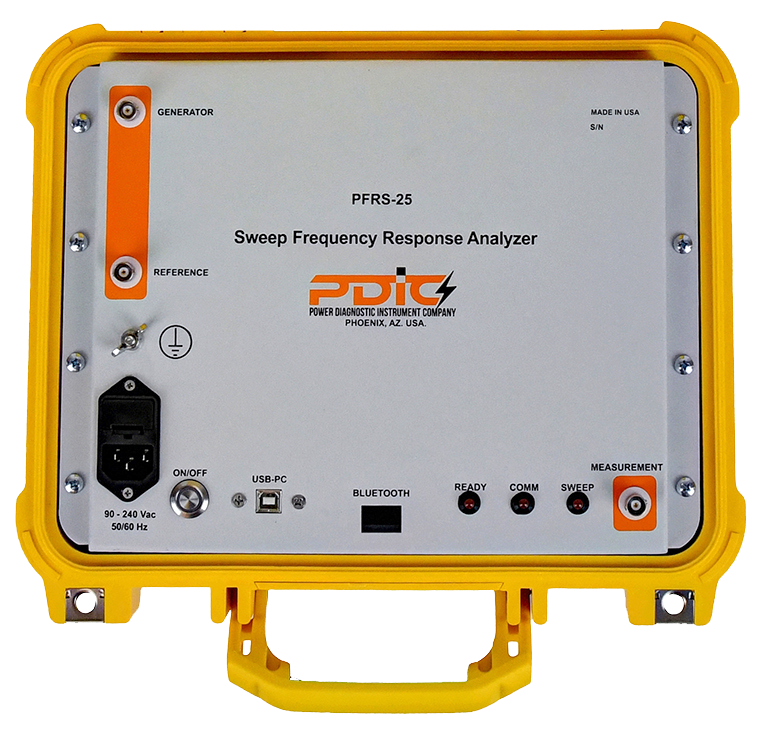